The ETX90 Observer telescope is reviewed in issue 59 of All About Space magazine. 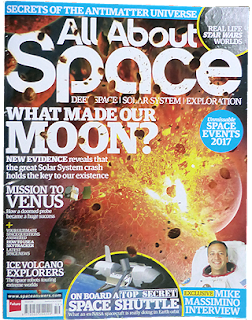 The review points out the high quality of the ETX90 stating that "The overall build of the ETX90 is excellent, promising to last for years of astronomy, even with heavy use".

Over the years the Meade ETX telescopes have set the standard as the most popular advanced small telescopes on the market.

Issue 59 of All About Space magazine is out now.


There is more information on the ETX90 Observer at the Meade UK website:
www.MeadeUK.com/Meade-ETX-telescopes.html 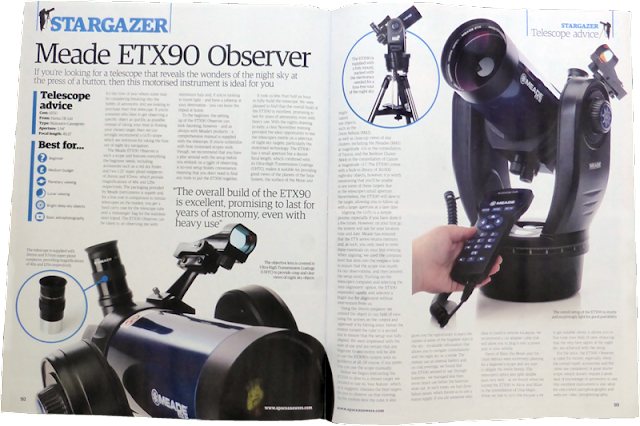 This time of year, many people purchase their first telescope and we often get asked to recommend a computerized entry level telescope. There are many options but two telescopes come to mind, the Meade StarNavigator 90 and the Meade ETX80 Observer.

Both telescopes use fork mount designs (altazimuth mounts) allowing the user to set them up quickly and start observing within minutes. Fork based telescopes do not need counterweights or precise balancing, making them well-suited for beginners. Furthermore, both telescopes are based on a lens design (refracting telescopes). Typically, refracting telescopes do not need to be collimated by the user. Collimation is the process of aligning the optics to maximize optical performance. This process can be time consuming for novice astronomers.

Computerized telescopes are controlled with a handbox controller such as the AutoStar on the StarNavigator 90 or the AudioStar on the ETX80 Observer. The user does not physically rotate the telescope but issues commands through the keypad on the handbox. The handbox includes a database of planets and deep-sky objects including galaxies, nebulae and star clusters. The user can select any of the objects in the handbox’s database and the telescope will slew to the target and once there, it will track it automatically compensating for Earth’s movement. At any point the user can select another object of interest and the telescope will slew and track the new object. This method of operation is often referred to as “GoTo” functionality or GoTo telescope. In order to use this functionality, the telescope must first be star aligned.

The StarNavigator 90 is a refracting telescope with a lens aperture of 90mm. It is well suited for visual observation of the Moon and the planets. The Moon is an impressive sight and the planets despite their much smaller appearance will show some detail such as the polar caps of Mars, Saturn’s rings and Jupiter’s zones. Some deep sky objects will also be visible in grey scale because colour is not apparent in such distant and faint objects. More deep sky objects will be visible from a dark sight without light pollution.

The ETX80 is one of Meade’s all time classic refracting telescopes. Although it will show slightly less detail on the planets compared to the StarNavigator 90 due to its shorter focal length, it will perform better on deep sky objects. It is a step up from the StarNavigator 90 making it the ideal beginner’s all-round telescope or the perfect travel scope even for experienced amateur astronomers. It is compact and easily portable and it even includes a backpack.

The optical coatings on the objective lens and the Super Plossl design of the eyepieces ensure that the ETX80 will provide the best optical performance of any telescope in its class. It can also be used for astrophotography thanks to its built-in flip mirror and internal barlow lens allowing a camera and an eyepiece to be attached to the telescope at the same time. This feature simplifies astrophotography or even terrestrial photography. The two-arm fork mount provides a more stable camera platform too.

The AudioStar handbox controller bundled with the ETX80 Observer is one step above the StarNavigator 90’s AutoStar (#497) handbox and includes over four hours of speech describing the objects tracked by the telescope. People standing near the telescope will also learn by listening to the informative narration.


You can find out more on the Meade StarNavigator 90 at:
www.MeadeUK.com/Meade-StarNavigator-telescopes.html

More information on the Meade ETX80 Observer at:
www.MeadeUK.com/Meade-ETX-telescopes.html


These telescopes can be purchased from the following Meade UK dealers:
www.MeadeUK.com/Dealers.html